Facebook's growth continues to slow down

Facebook's growth in the United States, Canada and Europe has completely stopped. With the release of the company's Q3 earnings report, the number of users in the US and Canada remained at 185 million. In the same report, the decline in European users from 279 million to 278 million was noted. It is also thought that Facebook may have lost 1 million users with GDPR (European Union Data Protection Directive), which came into force in May. 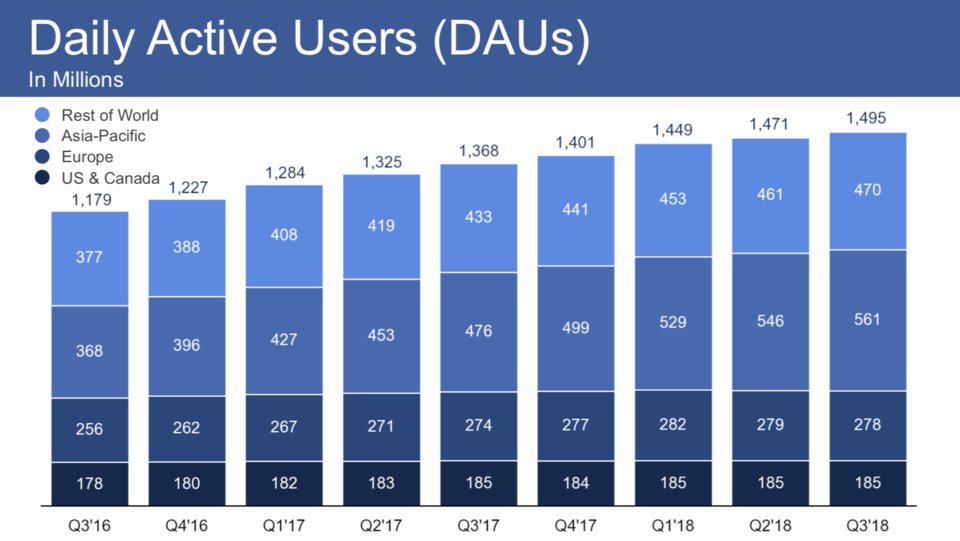 Nevertheless, Facebook continues to grow internationally. The company, which has increased its daily active user base by 9 percent per year, has 1.47 billion daily users. The number of monthly active users increased by 10 percent compared to the same period of the previous year and reached 2.27 billion monthly users.

However, all these growth rates unfortunately do not change the slowdown in the growth of Facebook from year to year and quarter to quarter. Moreover, as we mentioned before, the growth in North American and European markets, which generate the most revenue, has stopped.

Concerned about the loss of more users and keeping new users on the platform, Facebook's future may be in danger, according to some critics and analysts. 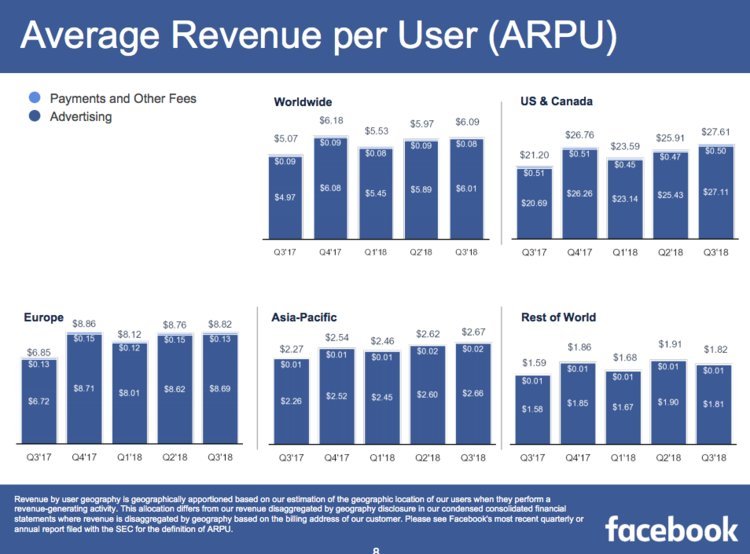 As Wall Street analysts have predicted, Facebook announced an increase in advertising revenue by 33 percent year on year to $ 13.73 billion. Profits per share are above analysts' expectations of $ 1.76. However, both monthly and daily user growth remained below Wall Street's forecasts. Nevertheless, we can say that Facebook has done a good job in managing the investors and the press when we consider the huge downturn in the past quarter. Therefore, Facebook's stock value displayed a stable stance during the closing hours of the stock market.

In the meantime, there is a benefit in talking about Facebook's future plans as well as their financial situation. Zuckerberg, who wants to improve the future of the platform with the Stories center, plans to implement temporal and private messaging on both Facebook and messaging applications. Facebook Watch as well as group-oriented products such as Groups, Events, and Pages are highlighted on the platform, while Newsfeed is being launched.

Mark Zuckerberg's statement on this subject is as follows:

Public sharing will always be very important but people want to share privately too. People feel more comfortable being themselves when they know their content is only seen by a small group and when they know it won’t be around forever.

If you remember, we had already shared the effect of sharing and interacting with Instagram Stories on the user. That's exactly what Zuckerberg is talking about. However, the story, video and community prioritization on Facebook is a must for the platform to prevent user loss. The manipulation of US elections in 2016 by Russian Agents through Facebook, the Cambridge Analytica scandal, and finally the security breach affecting 5 million users has seriously undermined users' trust in Facebook.

However, when we consider Facebook as a company and not as a platform, we can say that it will be on our agenda for a while with its family of services and companies. Shaken by the resignation of two founding partners, Instagram has the ability to save Facebook with new ad models, interaction rates and a fast-growing user base. Likewise, Messenger and WhatsApp, which have improved their advertising models, have managed to attract businesses with promising advertising models. As a result, it is possible to say that negative developments in Facebook's platform can reach a solution with this family of services.

Facebook's growth continues to slow down
Comments
Follow the developments in the technology world. What would you like us to deliver to you?

NEXT
Coinbase reached 8-billion-dollar valuation with 300-million-dollar investment
Although the crypto market has been calm for some time, investors are determined to invest in…
Tuğçe İçözü