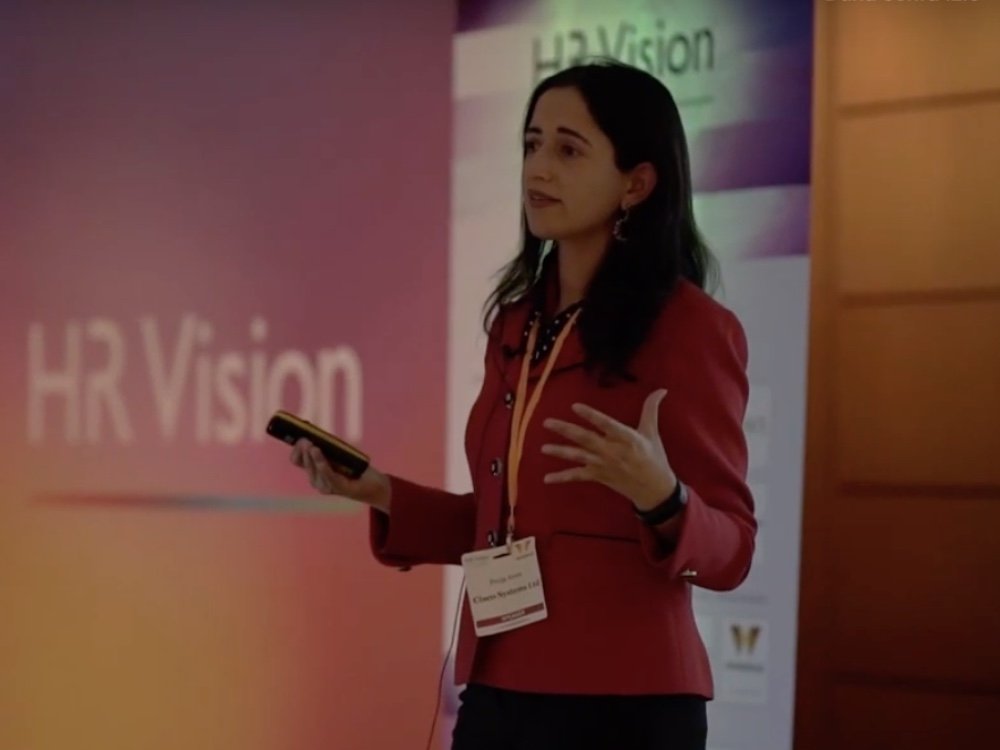 The HR Vision London event I attended recently was mainly focused on digitalization, leadership and technology in the HR sector. The first speech was held by Dr. Kris Naudts, Founder and CEO of Culture Trip.

Dr. Naudts discussed Culture Trip’s corporate culture with more than 300 freelance content producers globally. Considering that Culture Tripims culture is focused on culture-oriented content, I can say that the company's perspective on culture is quite extensive.

Leadership in the digital age

After Dr. Naudts, Shell Vice President Gerard Penning got on stage. Leading the audience with a speech with the topic “Leadership for the Digital Age”, Penning left the stage to David Wreford from Mercer. Just like Penning, Wreford focused on digital.

Talking about building a digital employee experience, Wreford said that the definition of Digital Leadership has come to the fore in the World Economic Forum article. The first of these two concepts are consistently defined as a culture of innovation or experimentation, and the second is defined as speed. 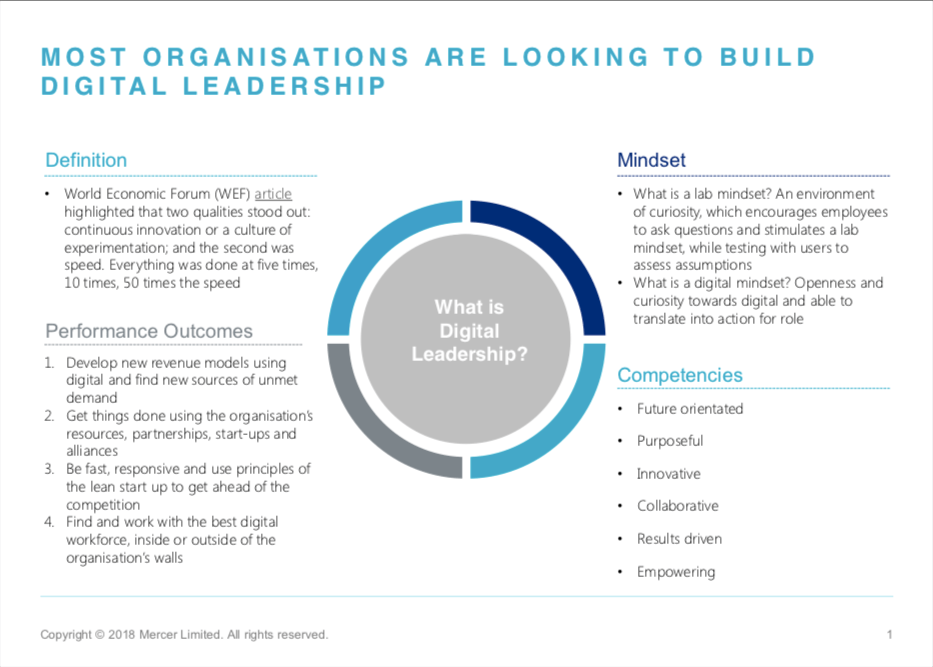 When we look at the performance transformation of this model, we see that the topics such as using digital to develop new revenue models and carrying out the works by using the resources, partnerships, startups and strategic partnerships of the institution come to the fore. The changing and renewed business world with the rise of digital and technology brings a new leadership concept. In this context, the new rules of leadership development are creating leadership, context and sustainability.

Lee Walker and Vicki Culpin, from Hult International Business School's discussed, the leading profiles and talents that leaders want to have in the whole process from 2005 to present in the Leadership Lessons session of Senior Leaders. 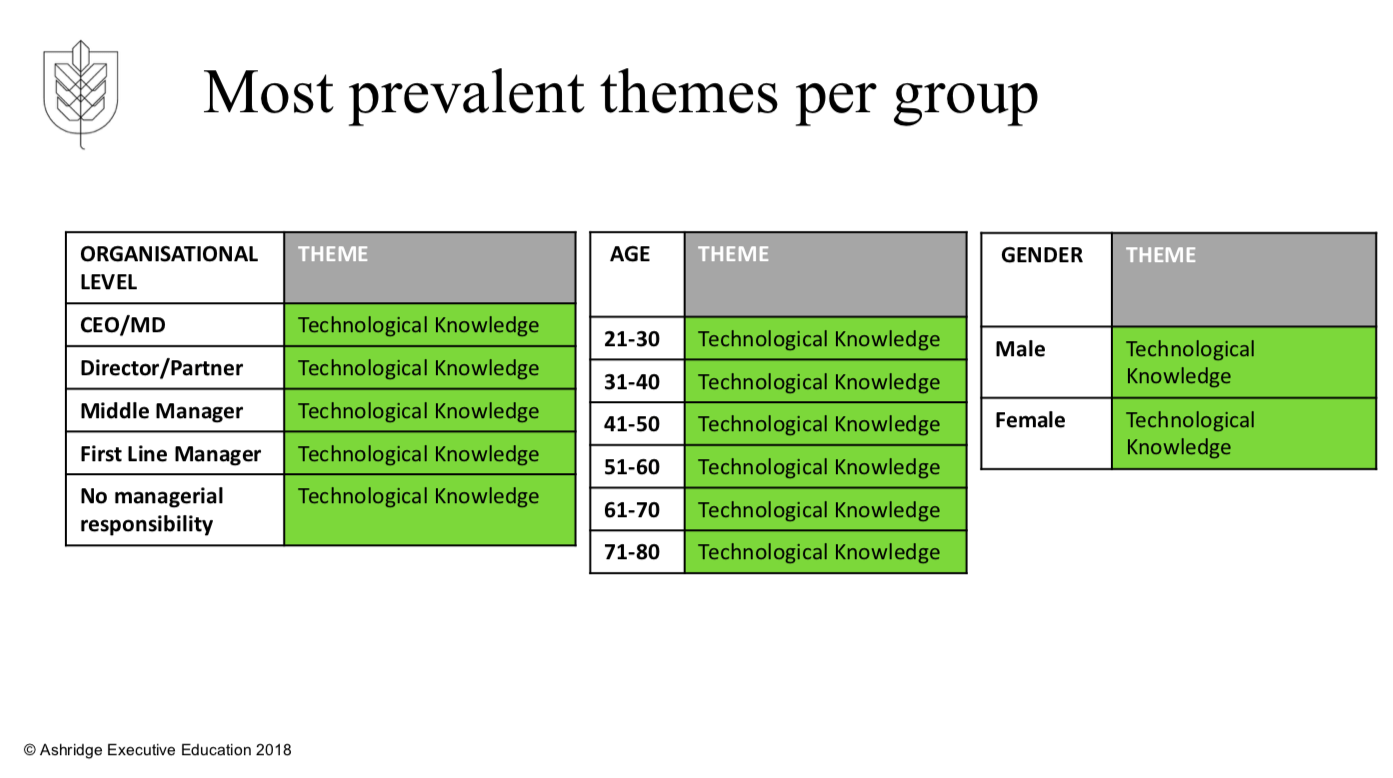 A study of people of different ages and levels of management reveals that leaders are in the pursuit of technological knowledge. In the same research, it is emphasized that the managers needed the most in the period when they started leadership and human relations management.

The future of talent acquisition strategies

Obviously, following the two different sessions on leadership in the event, I preferred to participate in the sessions focusing on different areas of the Human Resources sector and focusing on the future of the sector. In this sense, the speech of Ade Akin-Ain's from HOSTMAKER, about the Digitalization of Ability Acquisition was remarkable.

HOSTMAKER, which is a fast-growing startup, serving in the field of hospitality management. The company, which has been using Airbnb and other similar services in Europe in the recent period, provides more tenants and offers the company the expertise in interior design services and accommodation operations.

Akin-Ain said that HOSTMAKER has achieved a rapid growth, in the first two quarters of 2018 hired 70 people with the investments and interest in the last year. In the third and fourth quarters, the company started to hire 120 people. According to Akin-Ain, the company did not set up a system for hiring before October 2017, pushing them to develop a completely digital process. The company is currently serving in 9 different cities, 12 different offices in Europe and Asia. 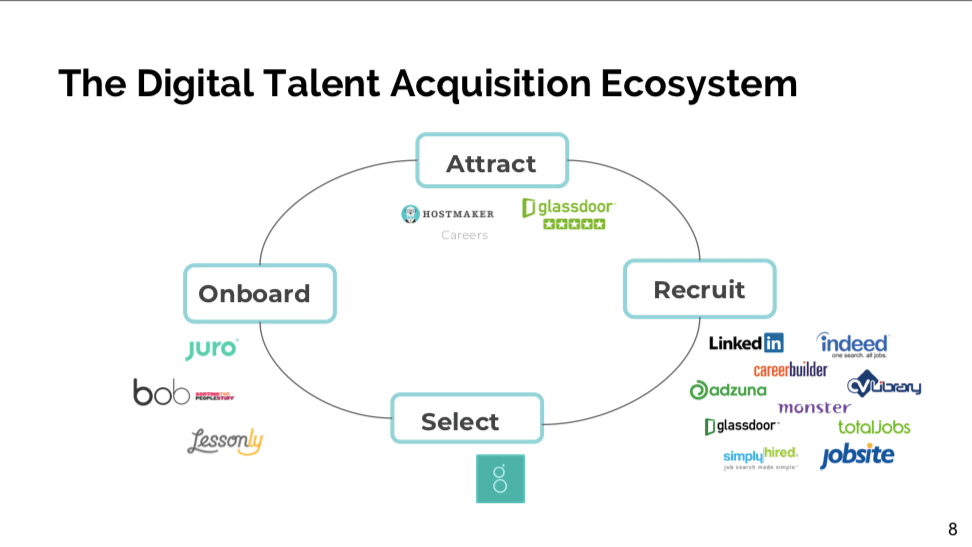 In the presentation, HOSTMAKER has reorganized its brand image as a digital employer to attract new talents globally. It is also emphasized that this brand image has been mentioned widely in Glassdoor, Facebook, LinkedIn and Instagram channels. I think this last point contains remarkable qualities for HR Managers in Turkey.

Of course, when it comes to human resource management, the process doesn't just end with hiring. In the process behind the recruitment, HOSTMAKER gets support from many different tools. Juro for Electronic Contracts, Bob for the HR Ecosystem and Lessonly for orientation are among these tools.

I think that this formula of HOSTMAKER is a serious source for the company and HR managers who have difficulty in scaling Human Resources during the rapid growth it has achieved.

Renewing the Role of the HR Manager

Moreover, all these technological developments and digitalization are changing the HR sector and forcing HR managers to renew and digitalize. In this sense, I thought it would be useful to share the talk of Niraj Varia with you, Managing Director of Invate-HR. In his presentation, Varia talked about the challenges facing HR Managers and their solutions.

Referring to the development of technology in this context, Varia pointed out that digital transformation is the reality of today. Stating that the robots are in the sector, Varia added that the rise of the link still continues. Today, Varia said that the workplace is becoming more transparent and the interaction between the group members is as important as organizational communication. Noting the rise of Tribalism, Varia said business networks became stronger and reduced formal hierarchical structures.

Following these challenges, Varia also shared different strategies that the HR manager could monitor against all these challenges. One of the strategies includes adapting to digital transformation and managing human resources as well as cyber resources. At this point, it is possible for HR managers to run their analysis capabilities on data and tools.

In the same way, managers can use the insight to create loyalty during company culture and value creation. In this sense, HR managers, employees; Their ability to co-operate in managing their business, their lives and their relationships with other communities is another strategy.

The ability to create new experiences on engagement, the rapid execution of operations, and the ability to manage uncertainty are among the highlights of these new strategies. 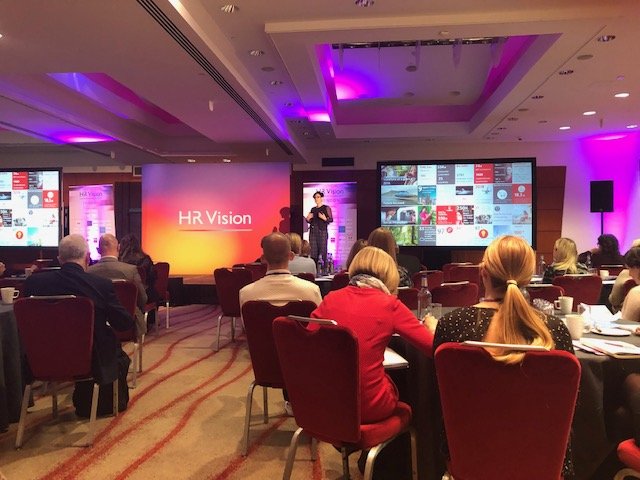 Doherty and Sherwin talked about “connections” which was mentioned in previous sessions, in the speech about linking everyone and everything to the end. In the presentation where digitalization is prominent, it was stated that the way of working changed and “digital stylers” were searched for talent acquisition.

While the new AGEDs were evaluated under the heading of new working styles, it was stated that new roles such as the Scrum Expert found their place within the company. In addition to attracting attention to the changes in the daily routines that took place in the company, self-directed teams were mentioned without the need for a manager. 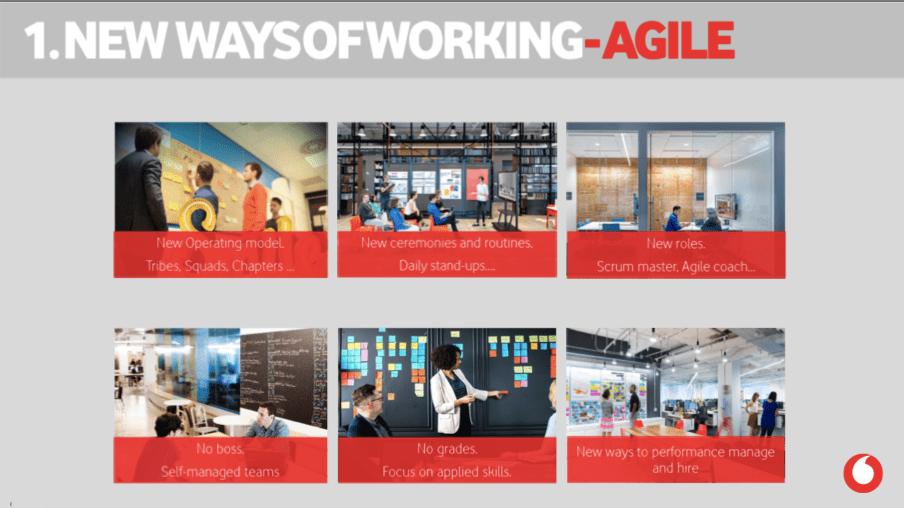 According to the duo, Vodafone often uses sources such as AngelList, GitHub, Behance, Kaggle and Dribbble to look for digital stylers in talent acquisition. The Vodafone HR Department, which provides a cross-functional experience to the employee after the recruitment process, considers the employee's separation process within the framework of an experience. 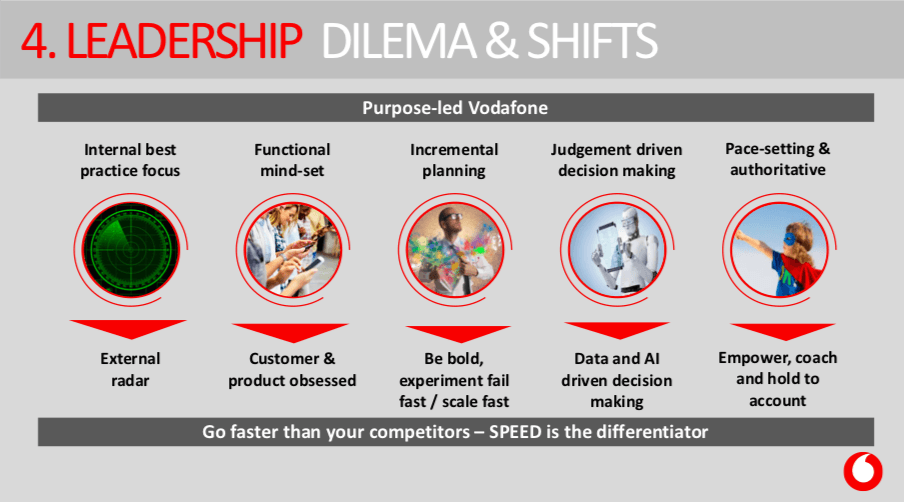 Vodafone is aware of the fact that many elements are changing. If we exemplify this through decision-making mechanisms; we can say that the reasoning-oriented decision-making process transforms itself into decision making based on data and Artificial Intelligence.

Likewise, the authoritarian attitude of the leaders, which determines the working conditions, turns into an attitude that powers, coaches and holds them accountable. While Doherty and Sherwin's presentation was drawing the new framework for the future of the HR sector, in the next session we looked at the implications for entrepreneurs to add entertainment. 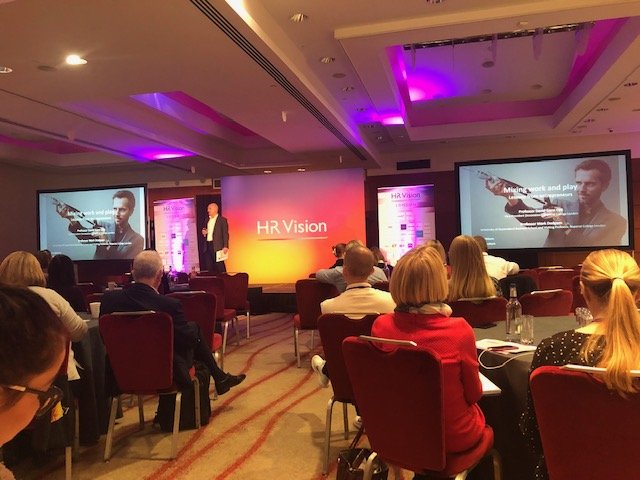 Professor David Gann and Professor Mark Dodgson of Imperial College Business School shared interesting industry data. According to these data, there is a decrease in employee productivity and an increase in the capacity of talent. The two stated that within the scope of the data, the generation Y dominated the work force and unfortunately said that this generation did not feel happy. 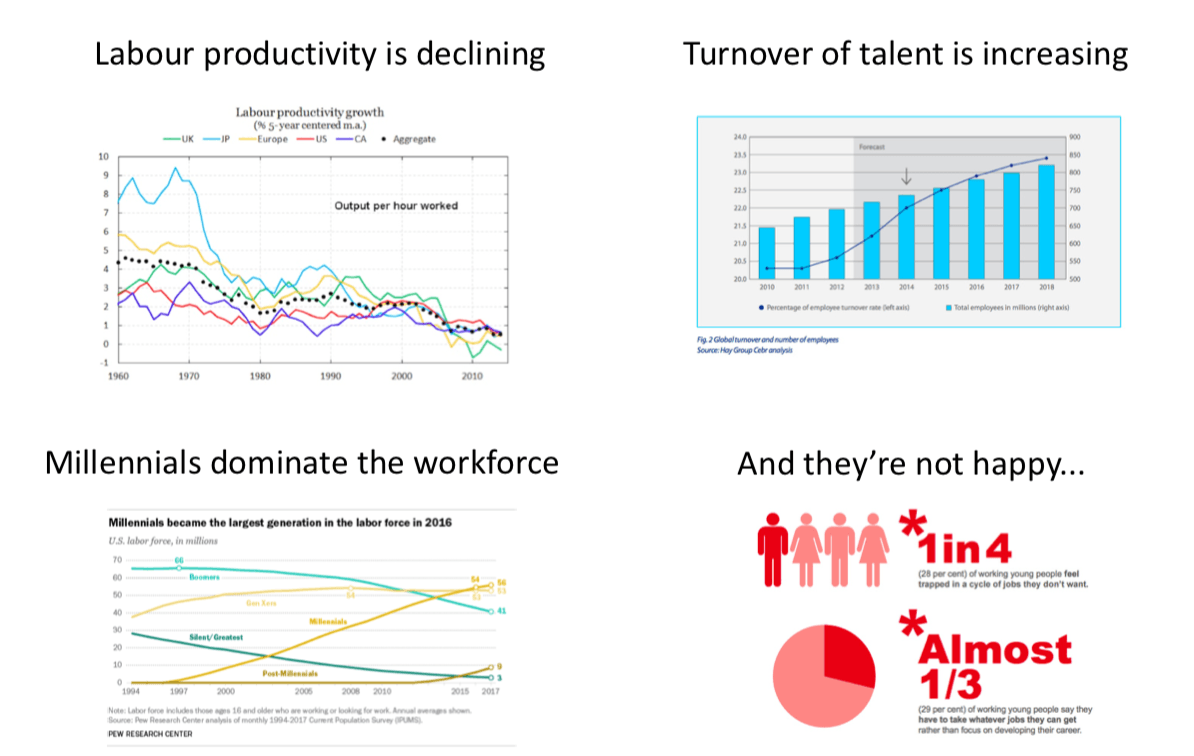 At this point, focusing on both the leader's behavior and the workplace, the duo suggested that workplaces should offer more fun to employees. In times of uncertainty, Professor Gann and Professor Dodgson, who suggested large organizations as examples of startups, stressed the importance of the game and entertainment layer to institutionalism. The concept of “Gamification”, which we usually encounter on the marketing side, may soon become a valid concept in human resources management.

One of the sessions that caught my attention during the event was the presentation of Dominque Kent from The Good Care Group and Lou Banks from Rising Vibe. 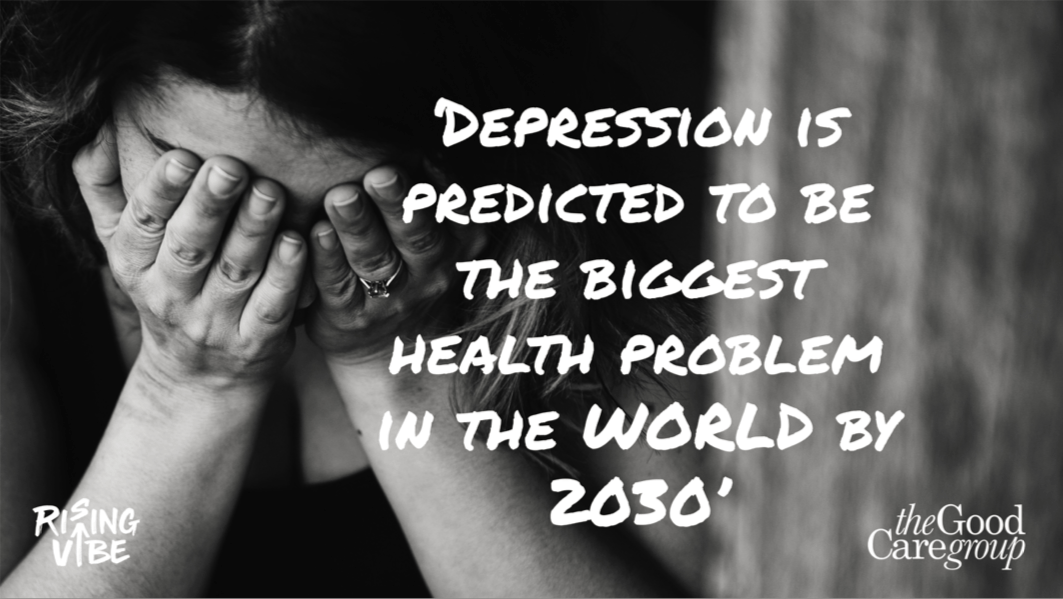 In the presentation, while focusing on the fact that depression will be one of the biggest health problems of the future, the focus was on the restructuring of the definition of business people. In this context, the duo combined the concept of business people with the humanitarian charity. In addition to taking steps to increase people's cash flow, sales and income in the workplaces, the importance of increasing human well-being was emphasized.

Stating that each individual affects the community, Kent and Banks stated that a simple, practical and common language could be used in the orientation process. According to the duo, the coaching approach is adopted within the organization and the feelings of the employees can be managed with the right questions. Moreover, employees should be positioned at the center of these questions. I can illustrate one of these questions with the sentence “What is it that you want to accomplish?”

In the first place, this approach may feel far to you, but let me add that the teams that implement this approach, has increased the holding rate of the middle management to 100 percent in the last 2 years.

In addition to the digitalization and technology focus sessions, I would like to share a session on the importance of social networks in human resources strategy. David Mason from Heineken UK center shared Heineken UK's recruitment strategy when he said it was not too late to add technology to the recruitment process.

The company wants to attract talents through social networks and shared its brand image with candidates in social media. Heineken UK, who wanted to inspire viewers on Facebook and Instagram, also shared the company culture. On YouTube, the team that unveiled the personality of Heineken with video content, focused on interaction and education on Twitter. The company, on LinkedIn, drew attention to the company's achievements and opportunities in the company. 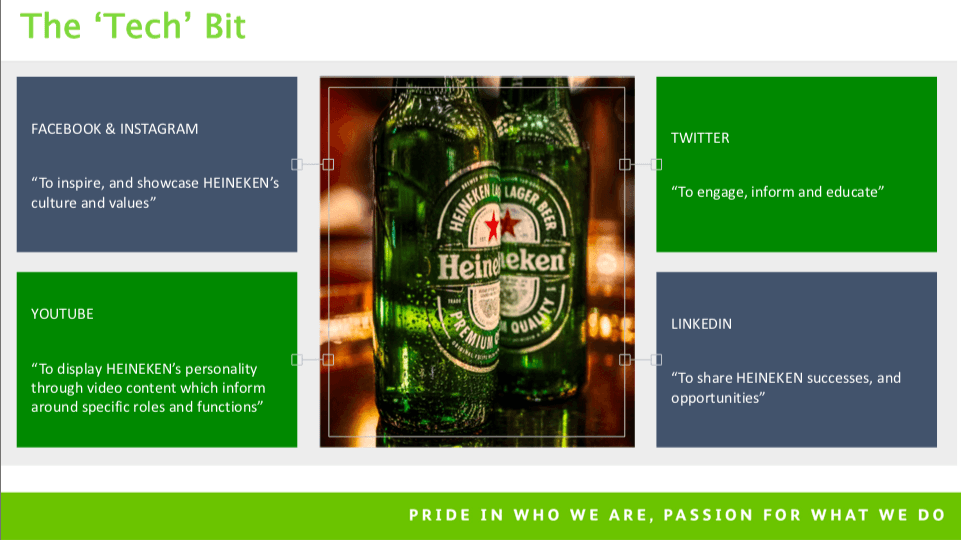 I am also sharing the results of this strategy. According to the figures of Heineken UK, Facebook and Instagram reached 159 thousand 868 people and took over 10 thousand interaction. The conversion of Jobs.Heineken.co.uk has also received 7 thousand clicks. 85 thousand 808 unique visitors visit the site.

Saving 150 thousand euros on LinkedIn, HEINEKEN Global has gained 565 thousand 851 LinkedIn members at the same time. H1 61040 job posting viewing was reached over LinkedIn ads, and over 7 thousand 834 applications were received on LinkedIn Jobs. As a result, 25 recruitments took place in H1.

I would say that alone this example should encourage HR Managers in Turkey to incorporate digital marketing into their HR processes. It is obvious that HR Vision London has been very efficient for human resources managers who want to digitalize and adapt to technological developments.

What does the future of HR look like?
Comments

James Murdoch likely to become Tesla's new chairman of the board