Expected to make its debut in Turkey in 2018, Tesla posted job adverts on Linkedln for its new store in Istanbul. The job posts include Sales Representative, Product Specialist and Store Manager; but there's been no official word on the expected opening date. 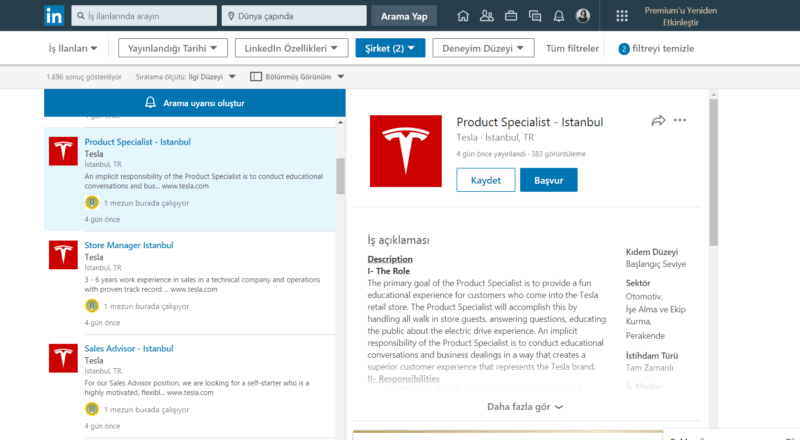 Tesla CEO Elon Musk posted a tweet in May and announced that he would open a new store in Turkey at the end of 2018. Musk also said he plans to visit Turkey to launch Tesla models, and that he loves Turkey. This will not be the first time for Elon Musk to visit Turkey. The previous year, he visited Ankara in November.

Towards end of next year. Btw, planning to launch Tesla in Turkey later this year. Love your country & will be there in person for the launch.

Tesla was not officially launched in Turkey, but many Tesla cars hit the streets. We may say that, after its launch, Tesla will blow your mind. Considering the job adverts posted in Linkedln, it won’t be surprising to see the launch in the near future.

Finally, I would like to draw your attention to the fact that the job adverts were posted four days ago and each has already been viewed almost 300 times. If you would like to work for Tesla, check its job adverts on Linkedln.

Tesla posted jobs on Linkedln for new store in Istanbul
Comments
Follow the developments in the technology world. What would you like us to deliver to you?

NEXT
Digime3D received its first investment of 2.2 million TL from Tarvenn
One of the winners of Bayer Grant4Apps Turkey, a startup accelerator program with more than 120…
Gözde Ulukan