We published the first season of Glocal last spring and Season 2 will start on October 21st. The first season largely consisted of the success stories out of Turkey, but the second season will mostly feature Central Eastern European entrepreneurs. Although the vast majority of our listeners were from Turkey, we saw a lot of interest from the neighboring regions as well. I expect this to grow further with Season 2.
Enis Hulli 17 October 2019
Share
Facebook Twitter Linkedin

We published the first season of Glocal last spring and Season 2 will start on October 21st. The first season largely consisted of the success stories out of Turkey, but the second season will mostly feature Central Eastern European entrepreneurs. Although the vast majority of our listeners were from Turkey, we saw a lot of interest from the neighboring regions as well. I expect this to grow further with Season 2. You can listen to our Trailer Episode here:

Glocal is a podcast that features entrepreneurs from emerging ecosystems, who started local and built global technology powerhouses. The majority of the entrepreneurial content online covers American success stories. However, the problems an entrepreneur from an emerging market faces are rather different.

A season full of adventures

Our first season at Glocal covered unique stories. Given the lack of access to capital in the local market, companies like OpsGenie and Foriba had to bootstrap and persevere before an eventual large investment round and exit. The lack of early adopters and small enterprise budgets pushed companies like Netsparker and SAASPASS to pursue customers elsewhere and launch international offices at very early stages.

Whether at early stages or later on, almost every successful startup out of emerging ecosystems moved into multiple office structures, covering different regions. In the first 14 episodes, we witnessed how the cultural differences and language barriers affect the already-dispersed organization. These inspiring entrepreneurs were also experts in leveraging regional advantages and hedging against the disadvantages.

There is a larger entrepreneurial and engineering potential outside the US than inside it. The experiences of these successful entrepreneurs reveal the likely challenges and how to overcome them. That’s why Glocal has seen great interest from Central Eastern Europe and the Middle East.

I shot all episodes of the first season in a span of 2 weeks and this caused recurrent errors throughout episodes. With Season 2, we are aiming for improved sound quality and more in-depth conversations rather than Q&As. We’ll again have weird English accents (including mine) but I see that as a positive :)

Our preparations for the new season started last month and we are ready for a stronger season. The lineup starts with Turkish entrepreneurs, but the majority of the episodes will have European entrepreneurs moving forward.

Rina Onur - Founder of Peak Games and Hemenkiralik. Also my partner in crime at 500 Istanbul :)

Peter Balogh - NNG. Grew to 500 people in 10 countries before the exit

Tatyana Mitkova - ClaimCompass (raised Series A from US investors)

Although people like the content, I can understand why they cannot spare 30-40 minutes to listen to every episode. That’s why we create 5-10 minute summary videos for each episode and we share it across all of our social media channels. You never hear my voice, it’s only the guests speaking :)

I also write weekly articles outlining key insights from each episode. We are very active in every single social media platform. We also share #TuesdayTips with advice from very influential people every Tuesday. We will start sending all this to your inbox every week! You can subscribe here.

Bridging fragmented ecosystems around the region

With the second season coming up, I am to grow the international audience at Glocal. Before moving to Season 3, I’m planning to start organizing small meetups in different countries I visit, plan an annual event, and even creating a small tool tailored towards entrepreneurs looking to raise capital.

I’m also planning to get together with the guests to shoot the episodes so that we can have more visuals/videos and even better sound quality. What do you say? 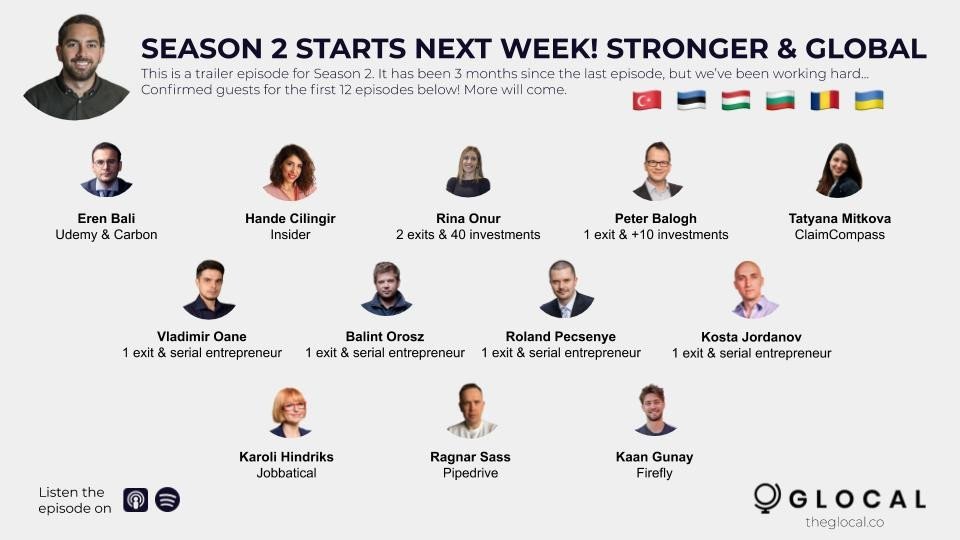 Glocal Podcast: Local success stories garner interest from the region
Comments
Follow the developments in the technology world. What would you like us to deliver to you?

NEXT
SAASPASS: Focus on opportunities that others overlook
Founded in 2014, SAASPASS is a comprehensive identity &amp; access management solution. The…
Enis Hulli